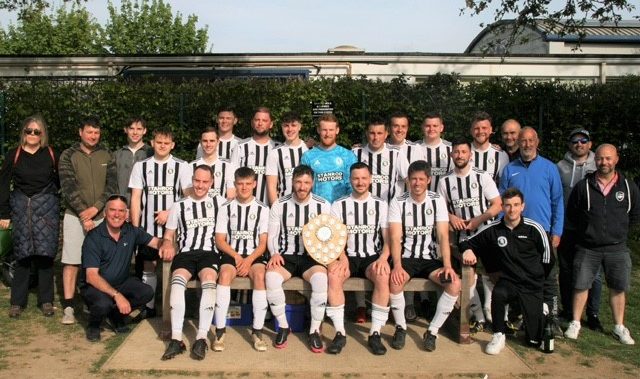 Woodcote’s last game of the title-winning season in Division 2 (East) of the Hellenic League, saw them take-on Stokenchurch who were already confirmed in last place in the division. The seventy-five enthusiastic home supporters might have expected a straightforward win, but the visitors gave a battling first-half performance to hold a 2-1 lead at the interval. Stokenchurch went ahead after 5 minutes as the result of defensive hesitancy in the home ranks.

Woodcote equalised on the half-hour mark as Joe Webber headed home Ryan Corbett’s corner. Five minutes later, poor defending enabled Stokenchurch to regain the lead. In the second-half, manager, Andy Silver, rang the changes and it was very different Woodcote side which dominated proceedings. However, the visitors defended resolutely and it was not until the 70th minute that the equaliser came. Tommy Chapman launched a high ball into the box and James Worsfold did well to head the ball into the path of Toby Nowell who poked the ball over the line.

Ten minutes later the score was 3-2, the scorer, Andy Taylor with a great strike from 20 yards after Frank Dillon’s corner was headed clear. In the dying minutes leading scorer, Toby Nowell, was put through to beat the advancing keeper and make it 4-2 with his 34th strike of the season.

After the match the Woodcote team was presented with the League Shield and individual medals by Woodcote Club Chairman, Pete McAlister, cue yet more celebrations.