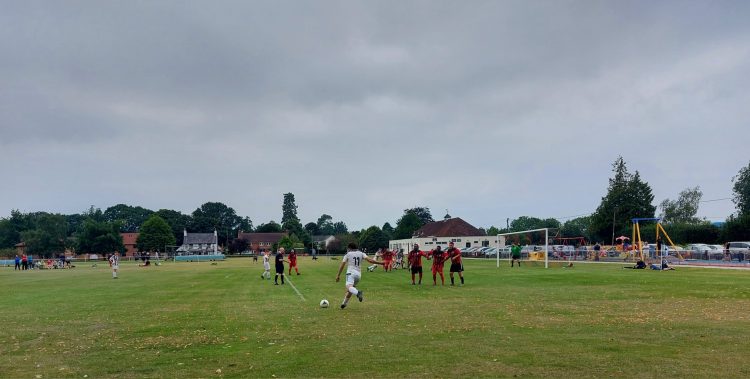 Woodcote tore apart Aldermaston on Saturday and in so doing increased their goal difference to an incredible 43. The home side had hardly got out of their own half when Sam Green gave Woodcote the lead from close-range, the assist coming from Joe Webber.

Two minutes later it was 2-0 when, following a good save from the home keeper from Joe Webber’s clever flick, Frank Dillon scored direct from a corner. In the 15th minute, Toby Nowell got his regulation goal after James Worsfold had headed on a cross for Joe Webber to unselfishly pass sideways for an easy finish.

After 33 minutes it was 4-0 with Joe Webber deservedly getting on the scoresheet from another Frank Dillon corner. It might have been five by half-time but for an excellent save from the home keeper from Toby Nowell’s volley. By the end of the first-half Aldermaston already had a player in the sin bin for dissent.

With Aldermaston down to ten men it took Woodcote only two minutes to make the score 5-0, James Worsfold heading home from Mike Mattimore’s cross.

On 53 minutes it was 6-0 with Sam Green netting his second as he latched on to James Worsfold’s knock down from Frank Dillon’s free-kick. The seventh goal gave the irrepressible Joe Webber his second as he nodded home Sam Green’s cross.

By this time the Aldermaston team was totally demoralised and the player sin-binned in the first-half was give a straight red card for further verbal abuse. The final score of 8-0 was achieved on 85 minutes with Archie Clark, on as a substitute, rifling home an unstoppable shot, his first league goal for the club.

This win took Woodcote to the top of the table for the first time since early October and increased their unbeaten run to eight games.