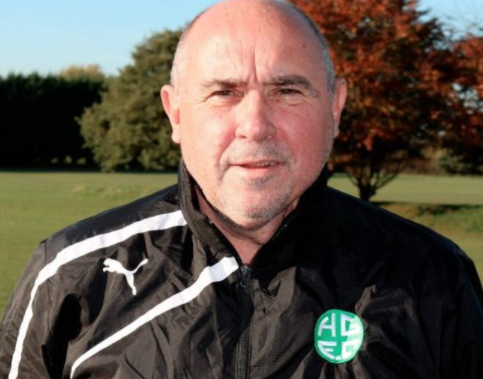 Showing the same fight and determination those of us had seen from the football teams he managed, Chris Allen kept his illness at bay for many years and typical of the man, few people knew quite how serious it had become. Sadly, after a long battle, Chris passed away yesterday at the age of 68. Fortunately, he was able to be surrounded by his family and our thoughts at this time are with Sue, Dave, Lisa and all his close family. It was a privilege to have known him and as far as Holmer Green FC are concerned he was a true legend!

I first met Chris almost 30 years ago when he had agreed to manage Hazlemere Under 8’s. For a few seasons they were ‘the team to beat’ but typical of Chris, they were taught the right way to play football and those early lessons stayed with them through subsequent careers.

Just over seven years ago I then got a message from Chris asking if I fancied getting involved with Holmer Green FC. A typical understatement, as a little while later I found myself as Chairman.

Chris had joined Holmer in 2009 when the Club were in the First Division. He had previously managed Penn & Tylers so knew the local pool of talented footballers. In his first season he won promotion, winning 28 games and only losing 3. Back in the Premier Division Holmer finished 17th in their first season. There began a run of nine seasons where he kept the team in the Premier Division of the Spartan South Midlands Premier and then the Uhlsport Hellenic Premier. A quite incredible feat given many of the teams we played were paying wages but Chris always managed to conjure up a new face

when one was needed and instilled his own grit and determination in the teams that he assembled. In season 2015/16 his team finished 7th, the highest achievement. He created high achieving teams from lads who will never forget the seasons they pulled on the green and white kit and time spent with Chris. In recent seasons Kevin Stone joined him on the touchline, a partnership forged on mutual respect. One of my favourite memories is of Chris, never willing to back down, of always wearing shorts in the dugout, even on the coldest winter night.

The move into the Uhlsport Hellenic signalled the end of his coaching career, long trips to Gloucestershire and Hereford meant after an initial season Chris decided to retire. Those close to him knew it was the right thing to do but Chris wasn’t content to sit at home on a Saturday. After a seasons break he created an Old Boys team who in their first season finished second in the First Division of the Aylesbury District League. Sadly his poor health restricted his appearances on the touchline but his spirit was evident in all the lads that were encouraged to turn out for the team.

We will all miss him but his legacy lives on in the Club to whom he committed so much. It is our responsibility to build on what he did and ensure the Club continues to prosper and be a place where football is played the right way, the way Chris would have expected.

I’m told that on Sunday a delivery was unexpectedly made to his house. But not unexpected to Chris. He had ordered a 50” TV to be delivered for his bedroom so he could watch West Ham play Aston Villa from the comfort of his bed. The best West Ham team in his lifetime winning to go 4th was a perhaps a fitting last game for him to watch. RIP Chris.