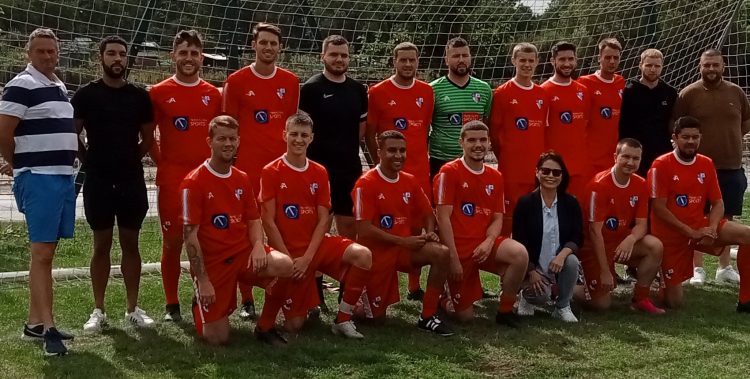 Maria Aries of Trans-Global Sports is pictured with the team at Headington’s Barton Park ground.

Maria’s husband, Tony Aries, set up Trans-Global Sports in 1989 after many years involvement with youth & adult football in Oxford. Before that he had a chain of shops called Oxford Sports, his career in football management & coaching starting with Rose Hill boys & youth teams before encompassing Sunday football & calling his team Leafield Athletic after the road he then lived in, winning the Sam Waters Cup with that team while they were still a Division Three side. Tony then took on the management of Hellenic League side Morris Motors, beating then Southern League side Witney Town in the quarter-final of the Oxfordshire Senior Cup in the 1982-3 season.

Maria said “I wanted to find a good local sports team that we could sponsor/help in Tony’s name. When Headington Amateur goalkeeper Jamie Buchanan came to work for us, I found the opportunity. It has always been at the heart of Trans-Global Sports Ltd to support up and coming athletes to give something back to the community. In March 2021 Trans-Global Sports Ltd had the opportunity to sponsor the home kit of Headington Amateurs team in Tony’s name to remember him, his lifetime passion in sports and to inspire the next generation of athletes”.