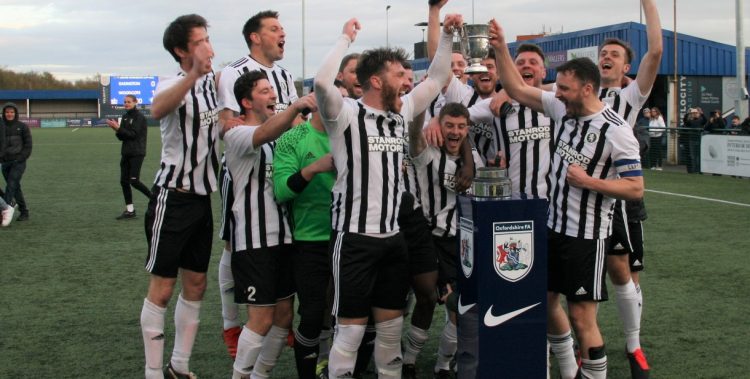 Only a week ago Woodcote were celebrating a title win in the Hellenic League and a week on they completed the double with the narrowest of wins in the Oxfordshire Intermediate Cup Final at the Velocity Stadium, home of Oxford City FC. In front of a crowd of over 200 the Woodcote players showed bags of character to overcome very worth opponents and, judging from the scenes of jubilation at the final whistle, the vast majority of supporters came from Woodcote.

Easington shaded the first-half and might have taken the lead midway when a great strike from 25-yards drew a terrific finger-tip save from Steve McMullen, the ball bouncing back into play off the upright. Woodcote created a few half-chances in the first period, with Joe Webber coming the closest to scoring, but being thwarted by a piece of quick thinking by the Easington keeper.

It was an inspired half-time change of formation and personnel by the management team of Andy Silver and Rob Wytchard, which tipped the balance in Woodcote’s favour. The introduction of Matt Ploszynski from the bench into the midfield proved immediately decisive. With his first touch, Ploszynski hit a great shot from distance which brought a fine save from the Easington keeper. Then in the 57th minute came the decisive goal. Frank Dillon galloped down the left and his cross found James Worsfold who skilfully laid the ball into the path of Matt Ploszkynski whose powerful shot found the net.

After that, in spite of their best efforts, Easington were seldom able to breach Woodcote’s resolute defence in which the back four of Ryan Corbett, Alec Curtis, Sam Green and Frank Dillon were outstanding. When they did threaten to score late in the game, they found Steve McMullen in goal impossible to beat. He made several fine saves including one of his trade-mark double saves close to the end which astonished everyone in the stadium.

Woodcote more than matched their young opponents in the second-half, especially in midfield where Ofari Boateng and Tommy Chapman were at their best, and they might have increased their lead late-on when Jake Dillon shot just wide and then Joe Webber was through in space but rushed his shot and saw the keeper make a good save.