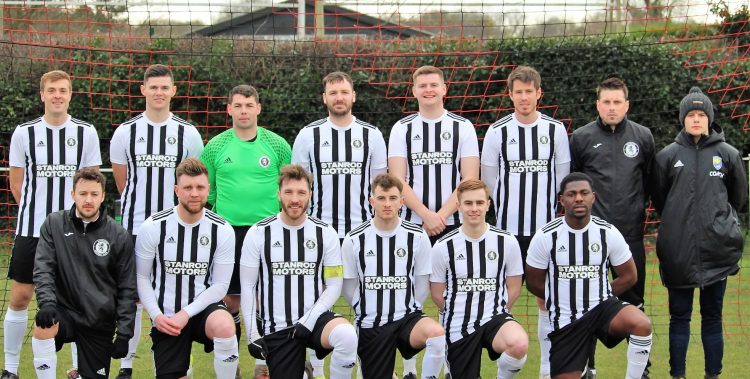 Woodcote today defeated Chalfont Wasps by four goals to nil. These three points added to Procision’s loss to Watlington meant that Woodcote could not be caught at the top of the uhlsport Hellenic League Division Two East.

Woodcote have only lost twice in their twenty-three league matches and still have five to play. Worthy champions.

There were scenes of jubilation in the Black Lion in Woodcote just after 5.00 pm on Saturday when news filtered through that Watlington’s 2-1 win over Procision meant that Woodcote were confirmed as champions of the Hellenic League Division 2 (East). A remarkable season has seen the club take the title with five games still to play. This win over a spirited Chalfont team was Woodcote’s 17th consecutive win in all competitions.

With the prize at stake, it was no wonder that the home team flew out of the traps and established their dominance early. Thirty minutes of spellbinding football saw them take a three-goal lead. It took only 12 minutes for Toby Nowell to notch his 31st goal of the season, receiving a sublime through ball from Tommy Elmore and finishing in style. Within two minutes the score was 2-0 as Joe Webber sneaked in at the near-post to convert Frank Dillon’s corner. The third goal came on 25 minutes from a similar combination. Frank Dillon’s corner was headed-on by Sam Green and it was that man Webber again on-hand to score from close-range.

If the remainder of the proceedings failed to live-up to the opening period, it was no wonder as the game was effectively won and Chalfont made a good attempt to salvage some pride, though Steve McMullen in the Woodcote goal, had precious little to do all afternoon. Woodcote’s fourth goal did not arrive until fifteen minutes from the end. Matt Ploszynski’s cross found James Stewart who placed a delightful chip over the keeper.

In an impressive all-round team performance, in which the pace and ability of the front three, Nowell, Webber and Stewart proved decisive, Woodcote’s centre-backs, Alec Curtis and Sam Green held total dominance, as they have done in almost every game this season.

Woodcote should go into next Saturday’s Oxfordshire Intermediate Cup Final full of confidence, but they will have to be on top-form as they take on Easington Sports, champions elect of the Hellenic Division 2 (North). The game takes place at the Velocity Stadium, home of Oxford City FC and kicks-off at 5.00 pm