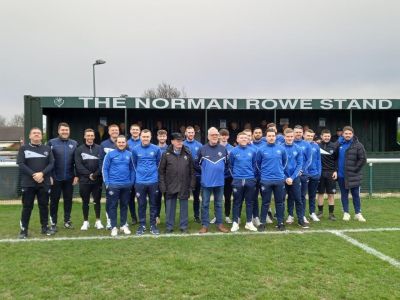 Penn & Tylers Green F.C. have named their stand “THE NORMAN ROWE STAND” in honour of their long serving President of over 25 years.

The ceremony, a first of this type in the clubs 116-year history, took place before the First Team game against Raunds Town F.C. on Saturday, 18th December 2021.

Norman Rowe was in attendance along with distinguished guests, family members, committee members and players past and present and was suitably surprised and emotional when he was lead along the pitch to see the stand with its gleaming new sign.

Chairman Tony Hurst said a few words about Norman’s 60 years’ service to the club including holding several posts within the club behind the scenes culminating in becoming President. He also pointed out that to this day Norman is ever present at games home and away. Clubs at this level cannot survive without the “Norman Rowe’s” and this is a fitting tribute to Norman and obviously this honour will also be a fitting reminder of Norman’s selfless service to the club for future generations that pass-through Penn & Tylers Green F.C.

The celebrations continued in the clubhouse over lunch where everyone had a good catch up and several glasses were raised, fittingly, in Norman’s honour.