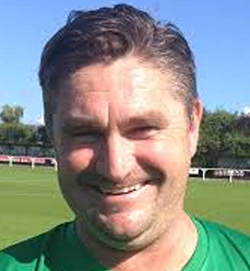 Nick East has stepped down as Kidlington Reserve team manager after taking up the position at the start of the 2015/16 season. Nick’s greatest achievement has been to oversee a young progressive reserve team who have helped in the development of many players who have successfully progressed to the first team.

In his own right he has also managed a very successful team and in his first two seasons he led the reserves to runners up spots in uhlsport Hellenic League Division Two West and the team were promoted to Division One at the start of the 2017-18 season. The last two seasons have been prematurely ended but in his four full seasons his team has reached four cup finals, winning the Chairman’s Hellenic Reserves Cup in 2016/17 and the OFA Oxfordshire Intermediate Cup in 2018/19. At the end of the last full season in 2018/19, Kidlington’s second string finished in its highest position in its history in sixth position. The last two seasons have been cut short due to the pandemic with his team sitting in respectable mid table positions in both years.

Nick would like to go on record in thanking his assistant and Kidlington’s Director of Football, Barry Hiles and the tremendous support given by the First Team Management team of Ben Sadler, Paul Brathwaite, Callum Wright and Nick Lacey.

In the last few years the football club has created a very strong culture and structure, a “one team ethic” that it can be very proud of.